Deep River Friends Meeting Cemetery is one of the oldest in Guilford County. The earliest grave that can be read today, P. Chipman – 1803, is not representative of its true age. While there are no records to indicate when the cemetery first came to be used, we can guess that it is contemporary with the first Meeting House, which was built in 1758. The oldest section of the cemetery, known originally as the Burying Ground, is largely free of grave markers.

The earliest Friends did not believe in marking graves, but occasionally a rough fieldstone was used, the deceased’s initials scratched on the surface. (It is interesting to note that as this custom became more widespread and elaborate, regulations for maintaining simplicity were established. An 1831 instruction states that stones were to be no higher than nine inches with only the initials of the deceased. By 1846 the instruction was relaxed to a height of twelve inches, with names, birth and death dates. 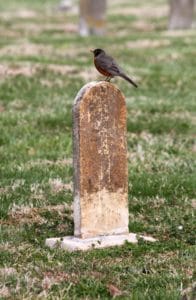 Over the course of time, the cemetery has expanded as space was needed. Successive expansions have included, in the south, the site of the first Meeting House (four cornerstones mark its location), and in the northwestern corner, the site of the original Deep River School, the first school in western Guilford County (a stone marker indicates this location). It was a WPA project in the 1930s that the cemetery took on its present appearance. The grounds were graded, cleared and seeded for grass. While the old fence, the wild rose bushes, and the sedge grass are gone today, the Deep River Cemetery remains a pastoral retreat within a thriving commercial center.

The Deep River Friends Memorial Association was founded in 1935 for the upkeep and care of the cemetery. To this end, one of the first projects of the Association was the planting of the maple trees in the cemetery’s center which today gives the landscape its characteristic appeal. The Association meets each year on the second Sunday of June at the Meeting House at the rise of Meeting for Worship. The membership consists of anyone who has relatives buried in the cemetery.

The columbarium at Deep River Friends Meeting has been completed and is ready for purchase.